DISCLAIMER: The following information is a result of years of rescuing unwanted, abused, neglected and handicapped exotic birds. It is not intended to serve as criticism towards any one person or group, but attempts to inform the public of the problems associated with wild animals living in captivity. 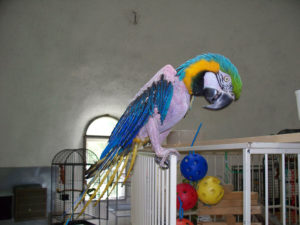 I am sorry to say that psychological disabilities are very common in captive parrots. Have you ever wondered what their wings were created for? This sounds like a very elementary question, but one that must be addressed. Of course, we all know their wings are for flying. Another question; do you know how many miles a day a large parrot in the wild is capable of flying? You will be amazed to know that larger species such as macaws and cockatoos can and will fly up to 500 miles a day. Why? Obviously, in the wild they are not handed their food, water, perch, sunlight and shower water. Therefore, they must seek it out daily. Because of their high intellect, they don’t necessarily follow the same route, but will vary their journey perhaps depending upon what they might like to eat that day. In short, they have to take care of themselves.

In captivity, parrots don’t have the luxury of flight. Instead they have a cage for security and, hopefully, loving caretakers that supply them with all of their needs. The lack of flight is a major frustration for creatures that were created to fly. Most of us sharing a life with a parrot don’t have the luxury of providing adequate space for their parrot to stretch its wings and fly. Do you suppose this could be one cause of frustration?

There are many other frustrations linked to captive living, but all go back to the simple fact that we are trying to domesticate a wild animal. Many think that because parrots can learn a human language that they are successfully adapting to captive living. Many others think that the bond between parrot and human is enough. Unfortunately, it isn’t. Why? If we, as humans, were to have our choices taken away, i.e.; our choice of food; when and where to bathe, when and whom to select for a mate, or simply where to go at any given time, we would be a sad society. Communism has proved that many times over.

Thus, by keeping parrots captive that would otherwise have these choices, sets them up for a fall. Before I go any further, I must interject here that I am not advocating the release of pet birds, or prohibition of ownership of pet birds, but rather I am trying to enlighten you as to some of the triggers of psychological disabilities.

Many think the sole source of frustration in pet birds is reaching the age of sexual maturity. Quite frankly, frustration begins long before that, as mentioned for the above reasons. It just seems to manifest stronger during the “birdie puberty” period. The usual effect is that of a bird that chews or plucks its feathers and/or its flesh. These manifestations occur during strong hormone flows, both at the onset of maturity and during their “natural” nesting seasons (dictated by their native tropical environment in equatorial areas around the globe). In some cases this behavior of self-mutilation cannot be stemmed. Often once a bird begins this act, it is irreversible. There is nothing left to do but accept the bird in his current state.

For many bird owners, guilt quickly sets in. They feel that they have personally contributed to their bird’s demise. Actually, each individual owner hasn’t done it, but the whole industry of keeping wild animals of all species in captivity has. It is a problem we humans have created, and thus must deal with. Unfortunately, it is at the animal’s expense.

Other disabilities such as physical ones occur. Baby birds may be hatched with defects due to many causes, such as improper care given by the parent birds, or improper care given by human nurturers of unhatched eggs or very young babies taken from their parents for hand feeding. Unfortunately, once a defect has occurred, regardless of the cause, it has to be dealt with. There are two schools of thought. One, to put the bird down. The other is to give it special care in respect to its handicap. This is a debate we won’t address, as no good can come from it. It is up to each individual to make the choice they feel best suits the situation. No one is all right or all wrong.

The other cause of disabilities is largely injuries. You can do everything possible to provide the safest environment for your parrot, and still have a freak accident. Case in point, Oscar the paralyzed cockatoo, which is featured on this web site. Additionally, negligence in keeping a bird clipped properly can cause indoor flight injuries. Also, the danger of having other pets and/or small children around birds. Naturally, the most common injuries are broken bones. However, head trauma results in many other neurological and physical disabilities.

The effects of disabilities on parrots and their caretakers, be it psychological or physical, are devastating. Again, we have the guilt factor. The caretaker goes through all the “what ifs”. What if I had him clipped sooner? What if I didn’t allow him in the kitchen during meal preparation? What if I hadn’t walked outside with him on my shoulder? What if…what if…what if. This kind of mental and emotional bashing isn’t doing the caretaker or the bird any good. After the handicap occurs, it is time to move on to a suitable course of action for both bird and owner. This may involve a discussion with your avian vet to determine how to best care for the handicapped bird. It also may, at some point, mean giving the parrot up to a qualified shelter or caretaker that is prepared to deal with the handicapped bird for the duration. At any rate, there are options.

In summation, it is best to weigh all of the issues BEFORE acquiring the pet you’ve always dreamed of. It is no longer a day when the bird sits in a cage without toys to play with, or a proper diet. These wild and beautiful creatures need and deserve much more.