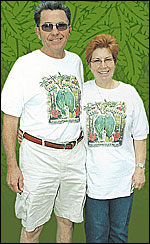 In 1989 John and Mary Bradford received their first parrot, a 6 year old, wild caught, female Yellow Naped Amazon Parrot. After a rapid series of deaths of immediate family members (3), we realized that Moppet with her comical personality actually was the one and only thing that got us through these deaths, and ultimately the loss of the best paying job Mary ever had.

Shortly thereafter we received a call from the pet store from which we got Moppet. David, the store owner, told Mary that they just received a Blue & Gold macaw that needed a special home. The reason was that this bird was TOTALLY blind, and it’s owner had just died at the young age of 46. This was our second parrot, and the first handicapped one which set off a series of 32 YEARS of work with the unwanted and handicapped parrots of the US.

At first we thought that because Moppet, our first bird, gave us so much happiness, that this should be shared with all. We originally thought to start a for-profit business setting up elaborate parrot environments for hotel and corporate lobbys; the reason being that with as much business travel going on, these parrots could bring smiles and relaxation to weary travelers. We would be responsible for the birds’ health and environmental care.

With much afterthought, we decided against this project, realizing that these birds would ultimately be teased, yelled at, etc., and halted the beginning of this venture. Instead, a local newspaper caught wind of our ownership of a blind parrot, resulting in our first front page news article.

As news spread throughout the greater Charlotte, NC area we were approached by schools to do educational programs, and healthcare facilities to do pet therapy. While still working full-time, the Bradfords set out to fill their weekends doing, first, pet therapy at nursing homes. Then we were asked to “audition” for the Charlotte-Mechlenberg School System to become an educator for their “after school enrichment programs”. We passed the test and thus continued for 7-8 years traveling to schools/nursing homes and rehab hospitals with a special group of “safe” birds, meaning they were cleared to be healthy and didn’t bite or have any aggression.

While all of this was going on, in March, 1994 we decided to go for non-profit status with the State of NC, and the Federal Internal Revenue Service.

Unbeknownst to us, it was a horrendous mountain to climb, lasting 4 months and culminating in being awarded with a 501(c)3, non-profit organization; with one exception, we were on probation for 4 years, reason being, the IRS had NO concept of what a parrot refuge was, and especially how to care for handicapped birds. Then in August, 1998 the probational exception was lifted, and we received permanent status.

Several years later, John built an addition onto to the original aviary, and this time the concrete was DONATED, and worked by John and our oldest son, Thomas.

After the first airing of “Jack Hanna’s Animal Adventure” in January 2000, a multi-millionaire, Mr. Peter Mennen and his wife, Carlene, phoned us from California stating that they saw the show and during the interview I mentioned that our dream was to have a second aviary. He stated that they were going to make our dream come true, AND THEY DID! 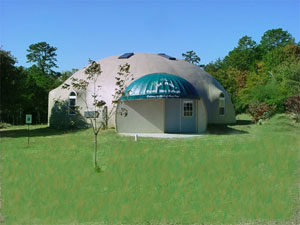 Construction on our new aviary began in June of 2000 and completed in early 2001. It measures 55′ in diameter, and 21′ tall, equipped with a rain system, air filtration, floor draining for cleaning, a waterfall and pool, windows and skylights, heat/ac, dehumidifying, a 6″ thick concrete floor that tilts towards the center into the drain for when we pressure wash the cages and floor. Over the drain is a huge artificial tree, and all throughout the aviary are REAL plants which provide fresh oxygen for the birds.

We had hoped to have a major GRAND OPENING, but it never happened. We needed the room fast, as we had up to 380 birds to care for. We had hoped the new aviary would work as a FREE FLIGHT aviary, but with our particular flock there was too much territorialism amongst the birds, so we spent a very long time trying to figure out how to make this work. After many years of experimenting, we decided that these CAPTIVE bred birds still needed their cages, which were the only homes they ever knew. That meant that the birds were released out of their cages daily as we did our work of feeding/cleaning/watering, daily. This has proved to be a very successful mission.

Unfortunately, September 11, 2001 occurred. Along with the grief all of us went through watching and praying for all concerned, our donations dropped dramatically, as people began giving billions to the charities serving the people affected by 9/11, which was perfectly understandable. This left us with about half the donations we had been receiving. Therefore, we were forced to re-evaluate our situation and adopt out ALL of our “pet quality” birds which amounted to 300 of our 380 birds, leaving us with the wild, and handicapped birds alone.

Now, years later, this aviary is still in use, and the birds are enjoying their daily routine of out of cage time. We still take in birds that are the most needy, also those bird owners that are the most needy, meaning they may be terminally ill, already passed away, etc. We can no longer take in any and all birds that we are requested to take in, as most other parrot sanctuaries are in the same situation; full and/or financially strapped.

It is our sincere hope that we will continue to reach the masses with our message of education, therapy and responsible exotic bird ownership, but this can no longer be accomplished without the financial assistance from those of us concerned for the future fate of these birds. If everyone that is concerned about the long term care of exotic birds were to give only one donation a year to our efforts we would be able to continue our work and expand into every state in the country. Your tax-deductible donations are welcomed.