Jack Hanna’s Visit to the Tropics 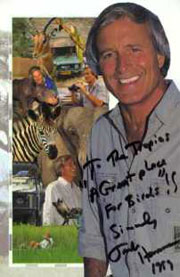 Jack Hanna, his wife, a camera & sound man, and the executive director of “Jack Hanna’s Animal Adventures” arrived at the refuge on Friday, Oct 15, 1999 around 4pm. We immediately loaded up and headed for the after school program we were scheduled to do. It went off without a hitch. After the show, the kids mobbed both Jack and the birds, and amazingly, the birds tolerated it so well.

Next morning at 8am they were at the refuge filming for 3 1/2 hrs. I asked Jack his opinion of our place, seeing he traveled all over the world and has seen just about every exotic animal alive. I was trying to get a perspective on our work in relationship to his 30 years of experience at zoos and in the field. He thought for a moment and said he couldn’t find the word to describe what he felt. He said “amazed” wasn’t adequate and finally said “astounded” was more appropriate, yet not quite adequate either.

After filming here, Jack and his wife, Sue, headed for Charlotte to a speaking engagement. The remainder of the crew went with us to a local nursing home and filmed briefly, our visit with some residents. After they left, we continued on into the Library where a large group was waiting to spend time with the birds.

All in all, it was an amazing experience. One that our family will not soon forget. The air date for the television show was the weekend of January 29-30, 2000. The show was aired on 268 national networks as well as in 64 foreign countries and then picked up by other networks world wide, in syndication. We hope you enjoyed the show, and a brief look into the workings of The Tropics. 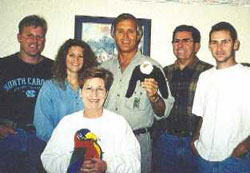 In the summer of 1999, The Topics was contacted by a member of Jimmy Buffett’s Parrot Head Fan Club. This member, Jack, and his wife are members of a North Carolina chapter and heard about us and our work. Some years ago the Parrot Heads on the national level, launched a “Save the Manatee” campaign that went quite well. So, Jack introduced the idea to me and told me of his plans.

With his own money, he funded the making of 500 pins (see sample parrot pin above) which are for sale for $5.00 each. The Tropics keeps all of the money from each sale.

The design of the pin was to compliment their “Save the Manatee” campaign and the entire project was introduced in October, 1999 to the national “Meeting of the Minds” Parrot Head Convention in Key West, Florida.

In addition, Jack also proposed that each chapter (totally over 130 nationwide) consider sponsoring a bird for a year. With their help in putting this project together, you may now purchase these pins for $5.00 each. Please consider such a purchase, and even introduce this program to others, including your bird club(s). You may contact me directly at: katzmary30@gmail.com, or (704) 280-5112, or P.O. Box 686, Kannapolis, NC 28082-0686 to make your purchase.

Thanking you in advance for your support;

Sorry, pins are sold out.

We would like to extend our sincere and heart felt appreciation to the following corporate sponsors for their continuing support in our efforts to provide dedicated, long-term care for handicapped and unwanted pet birds. Without the support from individuals, organizations and the business community, our beliefs in caring for these birds would only be a dream instead of a reality.

The tropics wishes to thank Topper Bird Ranch diet for its sponsorship of seed products over the past 14 years. It is with great regret that we see this fine organization closing its doors, but wish those involved the best of luck in their future endeavors. Signed: John & Mary Bradford

Parrots At Play
Like humans, all pet birds are not “perfect”. We believe that rescue birds are even more special and beautiful than most, and they deserve our best efforts to give them a better life. Our annual calendar is dedicated to these special pet birds, and to the compassionate humans that give the time, effort and resources to help “rescue” them and provide these wonderful creatures a better future. Click the logo above for more information, and we’ll give you all the information needed to help us.

Krista Kelley, through her companies North Georgia Web and GhostNet, Inc.
has been volunteering by maintaining and hosting our website since 2007.

The Tropics Exotic Bird Refuge
The Tropics, formed in 1989, and incorporated in 1994 as a State & Federal nonprofit, 501 (c)(3) organization is the oldest and largest facility of it’s kind. Included at the facility are: specialized home care for needy/handicapped birds, 2 caged bird aviaries, and a free flight dome measuring 55′ in diameter, 21′ tall, with a total of 44,000 cu. ft. of flight space. We take in on a permanent basis, those birds that are unadoptable, and pet quality birds are adopted out as time goes by. We do not seek out adopters, they come to us the same way the bird do, via personal contact from the owners. Having topped out at 380 birds, we have adopted out and downsized to 75 birds so that we may serve more pet owners who’s pets need permanent as well as adoptive opportunities.

On Thursday, November 4, 2000 a journalist and a photographer came to Kannapolis, NC to do an article on the Tropics. The parent company, Cox newspapers, owns and/or has publishing agreements with many other newspapers and TV station…. including the NEW YORK TIMES NEWS SERVICE.

Our article is scheduled to appear in the Sunday, November 21, 2000 edition of the Atlanta Constitution and the Atlanta Journal. It is our hope that the remaining 15 newspapers affiliated with Cox Newspapers, especially the New York Times, runs the article.